International artist Jimmy C and Indigenous artist Elizabeth Close approached the East End with a mission, to find a wall suitable for their tribute to community leader Jamie Goldsmith.

Nestled in-between red brick walls, his face greeting all those travelling westward. The mural is now a permanent reminder of his dedication to, and importance within the community.

The Cultural Significance of Jamie Goldsmith

Jamie Goldsmith is a Kaurna Narungga man from the Adelaide Plains and the Yorke Peninsula. His Kaurna name is Ngungana Kartemeru (First Born Kookaburra) Ilyaitpinna (father of Ilya). He is the only surviving son of Uncle Stevie ‘Gadlabarti’ Goldsmith.

Like his father before him, Jamie is a world renowned Yidaki artist (Yolngu word for Digeridoo, the original creators of the instrument), playing all over Australia and Overseas and celebrated widely for his immense talent.

Jamie has also performed and travelled widely with both the Paitya and Taikirtinna Dance groups; in which he has performed and held workshops in schools and festivals nationwide and overseas. 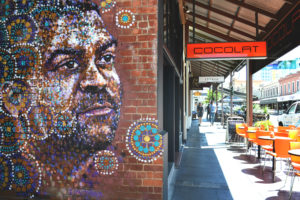 Through his versatility as both a musician and dancer, Jamie has performed at many high-profile events – playing in front of hundreds of thousands of people; welcoming the crowd to Kaurna Land and sharing his talent and culture with generosity, grace and good humour.

Jamie also shares his late fathers belief that language and culture are intrinsically linked; and has also worked with the University of Adelaide’s Linguistics Department, preserving and teaching the Kaurna language for the future generations.

Jamie also worked for over 10 years as an educator at the Living Kaurna Cultural Centre, running cultural tours around the Warriparinga Wetlands (windy place by the river), teaching school groups and the wider community about the ways in which the Kaurna people have used the environment of the Adelaide Plains for food, medicine, Art and culture for many thousands of years prior to Colonial occupation.

Furthermore, Jamie has also worked at the internationally renowned Aboriginal Arts centre, Tandanya, and is a talented wood carver. Currently Jamie is continuing in his role as a community leader, working within the Department of Corrections to support Aboriginal people within the prison system. 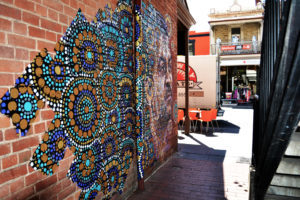 When he isn’t doing that, he’s travelling all over the world playing Digeridoo for the incredible ‘Electric Fields’. Jamie and his Yidaki alongside the talented Yankunytjatjara singer Zachariah Fielding, is a dynamic fusion of Kaurna and Anangu culture, and a powerful illustration of the diversity of Aboriginal talent and the ways in which it has evolved for contemporary global audiences, without compromising on the importance of culture.

Strength, knowledge and empowerment of young people and the community is at the forefront for Jamie, and he works closely with Aboriginal youth, mentoring them and helping them to develop a strong sense of self and strength of culture. His performing arts, music, language, cultural tourism, mentorship, work with youth and his current work in corrections, are evidence of Jamie’s commitment to being a community leader with the kind of talent, wisdom, strength, grace and generosity of a man who could only be his fathers son; who carries on the Goldsmith name and legacy by empowering everyone around him, and being the kind of teacher to his own two children that Gadlabarti was to him.

The mural can be viewed in Franks Lane, the connecting laneway between Rundle Street East & Vardon Ave.