Catch live performances while being tucked away and treated to the very best of the East End’s offerings.

We’ve hand picked a few performances that are sure to cure those winter blues: 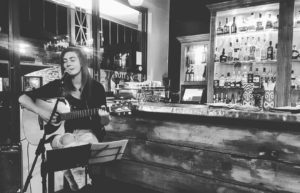 Ziggy returns to the William Bligh!

A brilliant solo acoustic cover and original artist. ZIGGY, Influenced by the 90’s to the now, adding a touch of contemporary soul to the mix will have you involuntarily throwing your arms in the air. Catch her from 8pm.

Catch Adrian Whyte as he brings his celebration of old music back to town with his mixture of guitar driven arrangements, crooning vocals and virtuous improvising at late night venue NOLA.

Kicking off at 8pm & toe tapping until late.

This FREE event will guide you through a myriad of venues as you enjoy a night of progressive music being performed at traditional and non-traditional hot spots.

This event is being presented as part of the Umbrella Winter City Sounds, Adelaide Guitar Festival – Guitars in Bars & NAIDOC SA Week.

Aidan J Jones and Frets Patrick team up for a night of foot stomping melodies, hot rags and tasty blues. Be transported back in time with Jones’s brand of forest-folk protest blues and Frets Patrick’s traditional ragtime blues. A great night for lovers of acoustic blues and folk music. Hosted by NOLA.

The Umbrella Winter City Sounds Festival kicks off on Friday 13th July, view the rest of the program guide here.